Some weekends I find it hard to move and get out of the house and this weekend was one of them. It was cold and wet outside on Saturday so naturally all I wanted to do was hibernate. The last thing I wanted to do was to venture out to the supermarket – is anyone else this lazy? I had a good look through my cupboards and tried to decide what I could muster up with what I already had… and this was the result – and it was deeeelicious! I’ve been meaning to make gnocchi since I went to Italy about 3 years ago, and it just so happened I had potatoes coming out of my ears. I had read that it was rather hard to make, so I was a little worried it wouldn’t work out! From the recipes I’ve seen there seems to be a bit of a debate whether or not to use egg and of course the type of potato is crucial! *Tip – you want to use a starchy potato. Now here I am, not wanting to move outside the comfort of my kitchen, so I decided to use the potatoes I already had. To this day I have NO IDEA what kind of potato I had (I bought them direct from the farmer in Daylesford) but it seemed to work ok (although I’m 99% sure it wasn’t the right potato…oops). I’m not a gnocchi connoisseur but Seb seemed to think it was ok :)

One of my first and favourite cookbooks is How to Cook by the UK’s favourite, Delia Smith – she’s a bit of a living legend over there. I love her, and in her famous book she serves her gnocchi with a butter and sage sauce. I still had some cultrured butter left over from my last post (and my oregano plant is going mental out the back at the moment) so I thought I’d make something similar. It was pretty naughty with all the butter but so delicious (and perfect as we had been out for a few drinks the night before ; ) All in all gnocchi is a little time consuming, but ultimately satisfying to know exactly what you’re eating. 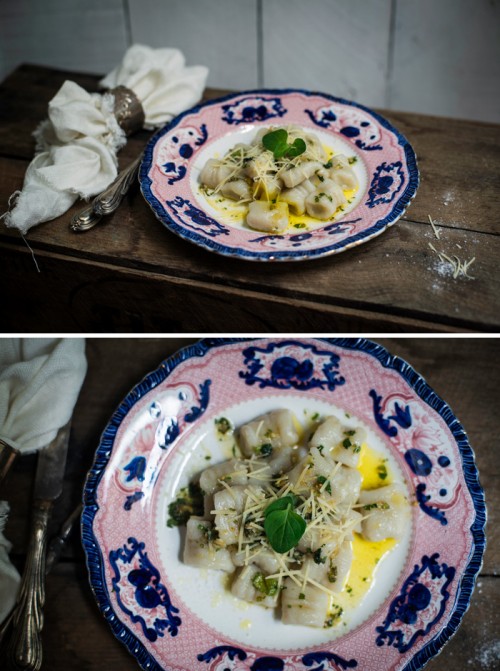 1.  Place a large pot of water (3 cms is fine) on the boil. Peel potatoes and steam for 15 minutes covered or until tender. Boiling makes the potatoes too soggy.

2.  Once the potatoes are cooked, blitz in a food processor until smooth and transfer to a large bowl.

3.   Start adding a little bit of flour until it becomes more like a dough. Sprinkle some flour on your work surface and knead in more and more flour each time until the dough isn’t too sticky. You don’t want to add too much flour or the gnocchi will become too dense and heavy.

4.  Roll the dough out into a long log and cut off small pieces 2cm long.

5.  Bring a saucepan of salted water to the boil. Add enough gnocchi to a saucepan to cover the bottom in a single layer. Don’t over crowd the pan because they can stick together. Cook for 3 minutes or until they rise to the surface. Use a slotted spoon to drain and transfer to a bowl and cover with foil to keep warm whilst cooking the remaining gnocchi – or eat straight away!

1.  In a fry pan on medium heat, add butter until melted. Add the garlic and cook for about a minute. Then add the oregano and let cook for a further 30 seconds and then spoon over the gnocchi and sprinkle with Parmesan cheese.