What a busy few weeks it has been. I have to apologise for not posting last week, I’ve already been told it didn’t go unnoticed!! Over the past two weeks I’ve been down to Tassie (and back) twice – phew. Once to say my goodbyes to a very wonderful man and the second to celebrate a very special lady’s 100th birthday. Needless to say, it’s been a rollercoaster of emotions. 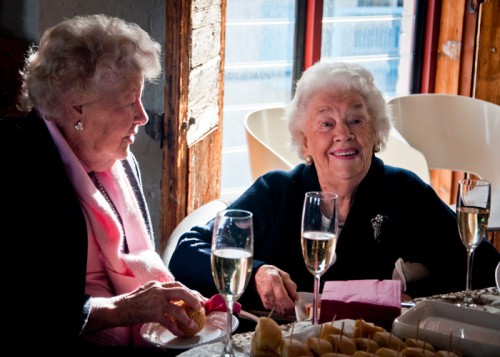 As I mentioned, our main reason for the trip last week was for Seb’s grandmother’s 100th birthday party! Oh boy, what a doosey it was! All the family met outside Seb’s mum’s house and gave ‘Ninny’ the grandest entrance I’ve ever seen!  At 12pm sharp she arrived by Rolls Royce (borrowed from a friend – fan-ceeeey!) which pulled up directly onto a red carpet… whilst a family friend played the bagpipes! It was epic, hilarious, emotional and very fitting!

Deliciousness by Queen of Tarts!

The party food was also amazing. Seb’s sister Brierlie (aka Queen of Tarts) had made a spectacular two tiered cake dressed with strings of pearls. Rather fitting as Ninny is never seen without her pearls! Queen of Tarts also made an assortment of miniature cakes and tarts which not only looked fantastic but tasted deeeelicious. Amongst the sweets was one of Ninny’s very own recipes – her famous passionfruit sponge. So as a special tribute to Ninny’s big 100th birthday, I thought I’d feature her passionfruit sponge on the blog. Queen of Tarts was kind enough to bake and share this famous recipe with us all. Thank you!

PS. Ninny doesn’t have any of her famous recipes written down anywhere as she’s made them all so many times. Queen of Tarts had to write it down as told. I just love how she described how long to whisk the egg… “until they stand up and bark at you”, hehe.

1.  Preheat oven to 180ºC
2.   Separate eggs and beat egg whites “until they stand up and bark at you”
3.  Add sugar and mix with a knife. Add the yolks and continue to mix. Gradually add flour and mix.
4.  Pour mixture into miniature loaf tins or one large round tin and bake in a moderate oven until a skewer comes out clean.
5.  Whip cream until it’s thick. Once the cake is cool, slice in half horizontally and fill with cream.
6. Mix the passionfruit with icing sugar and a little butter and spread onto the cake. Enjoy!
Note:  Traditionally, cut a circle in the middle of the large round cake and then cut the slices.  Whoever gets the middle piece will have good luck!