On Friday night we took Seb’s mum Leonie (over from Hobart for a few days) out for a few drinks in the city, then followed it up with dinner at St. Jude’s Cellar on Brunswick St. Their style of food could be described as French-Provincial home cooking, perfect for a cold Friday eve. All their dishes were comforting and very tasty. I had duck confit with celeriac puree, globe artichoke, fennel and fig jus. Deelish. We couldn’t resist a little something sweet afterwards so we shared a mighty fine self-saucing choccy pud. If I’ve ever got to choose between a lemon and a chocolate dessert I’ll always go the lemon – every time. But on Friday night I really felt like the choccy pud and boy I didn’t regret it… yum!  As you can see it then turned into a bit of a sweet tooth weekend, but hey, it was worth it! 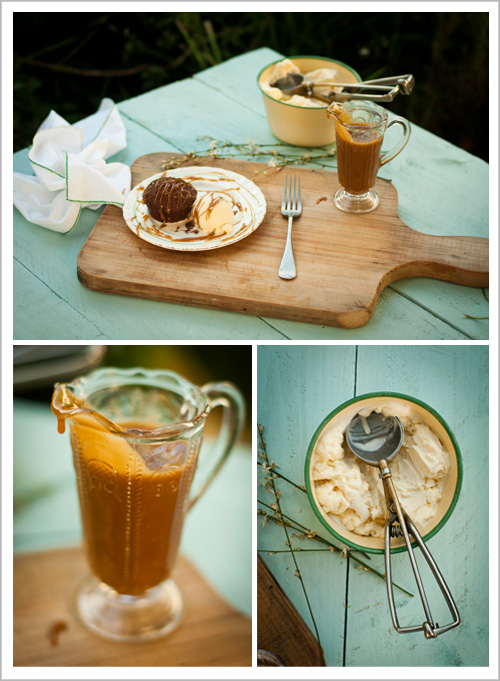 The next day we ventured south of the river and spent an afternoon at the South Melbourne market. After stocking up on fruit and veg (and queuing up for a cheeky steamed dim sim from the local dim sim stall, a Melbourne market institution), we popped home to prep’ for our friend’s 30th birthday; a cheese and wine party (my two favourite things in the world). Half an our before leaving I realised I had forgotten to bake anything to take, eeeek. You know how I love to bake, so it felt wrong rocking up sans-baked goods.  Anyway, with 30mins on the clock I whipped up a (very frantic) batch of savoury cheese, bacon & zucchini mini muffins before scooting out the door. They were still hot when we arrived, and damn they were so good, success… but I might have to save that for another post. ; )

1. Preheat oven to 180ºC. Butter and flour the sides of the cupcake tin.

2. Place chopped dates and tea in a saucepan and bring to the boil. Cook for a few minutes to soften the dates, then remove from the heat and set aside.

3. Beat the butter in a large bowl by hand or electric mixer until soft. Add the sugar and beat until the mixture is pale and fluffy. Beat in the eggs, one at a time, then beat in the mixed spice and vanilla extract. Fold in the date mixture. Sift in the flour and bicarb and fold in gently until mixed.

4.Pour the mixture into the prepared tin and bake for 25 minutes or until the top is firm and the skewer comes out clean.

5. Allow to stand in the tin for about 5 minutes before transferring to a cake rack to completely cool.

6. To make the toffee sauce, add all toffee ingredients into a saucepan that’s set over high heat. and boil for approximately 4-5 minutes. Stir regularly until it’s just thickened.

7. Place the sticky date cake on the plate with a good scoop of vanilla sauce. Drizzle the toffee sauce over EVERYTHING!!!