I never quite understood why Mince pies were called mince pies? There’s no beef in it? When I read up on the matter I discovered that I had good reason to be confused. Phew. The original mince pies, way way way back when, they were often filled with minced meat, a range of fruits and spices such as cinnamon, cloves and nutmeg. What we now know as Mince Pies didn’t eventuate until Victorian times when they sweetened them and reduced their size (thank god)!

I love a good mince pie around Christmas. The smell of them baking in the oven still takes me back when mum would finally get around to making a batch (it never occurred to me that I perhaps could have cooked some myself!). My brother in law (who is more English than the English) absolutely loves them and always makes a beeline for them. I’ve noticed on Facebook there have been a few posts mentioning these tasty treats so I thought it was time to whip up a batch for you all! After all, nothing beats a mince pie and a nice cuppa tea!

I’m not sure what type of tin this is but it makes the perfect little pies & is the same my mum uses.

Use any small cookie cutter for the shapes on top! 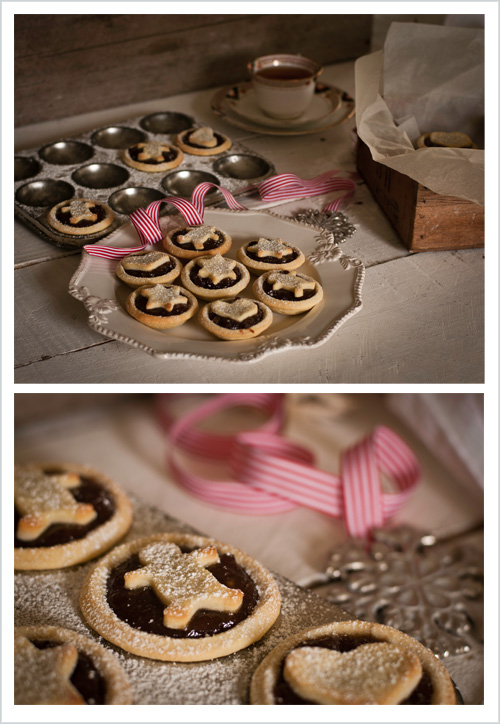 To make the pastry, place the flour, sugar and butter in the bowl of a food processor and process until mixture resembles fine breadcrumbs. Add the egg yolk and water, and process until the mixture just starts to come together. Turn onto a clean work surface. Shape into a disc. Cover with plastic wrap. Place in the fridge for 20 minutes to rest.
Preheat oven to 180°C. Roll out the pastry on a lightly floured surface until 5mm thick. Use a round pastry cutter (slightly larger than the pan) to cut 20 discs from the pastry. Use a small star or any other shaped pastry cutter to cut 20 shapes from the remaining pastry.

Line the small dome shaped pan with the pastry disks or use a muffin pan instead. Divide the fruit mince among the pastry cases. Top with pastry stars. Bake for 20-25 minutes or until light golden. Set aside in the pans for 5 minutes to cool before transferring to a wire rack to cool completely.