As I’ve said previously, my mum is a wonderful cook. I’ve tried to recreate some of her recipes on the blog (such as her Silverbeet & Feta Lasagne) but recently I’ve created some of my own ‘family favourites’. From what I’ve been told they are ‘phenomenally tasty’…  and yes, that’s quoted! I guess this is what you could call one of my signature dishes. This recipe has been tweaked and perfected every time I make it, and it just seems to get better and better.

For me, risotto has been one of those dishes that I wanted to perfect. The best risotto I’ve ever made was with a good friend of mine in the UK. The recipe was completely made up, but it was as though all the stars had aligned. We just happened to have the most amazing ingredients in the fridge. I’d say the most important thing for successful risotto is the stock (homemade preferably). On this particular night we just happened to have a duck stock (made a few nights before). My friend had just returned from holiday in Croatia and had bought some wild boar salami at a Croatian market.  That salami, added with lots of grated parmesan, white wine, plus zucchini and asparagus spears… let me tell you… IT. WAS. MINDBLOWING. It’s now commonly referred to as ‘duckzotto’ and has reached cult status to everyone that was there that night. ; )

After duckzotto there’s been no turning back. To add to my basic risotto, I roast pumpkin with lots of herbs and spices. Originally this was a vegetarian number but I felt like it needed a little something else. I have an amazing book called the Flavour Thesaurus by Niki Segnit that my sister gave me. It’s not so much a cookbook as a reference book that lists all the different flavour types and their pairings. I’d highly recommend this book if you’re one who likes to make up recipes and get experimental in the kitchen. The book suggests bacon pairs well with pumpkin… and indeed it does. Like I said – phenomenally tasty.

1. Peel the pumpkin skin off and chop into cubes. Cut the bacon rashers into small squares and add everything to an oiled tray. Sprinkle the paprika, nutmeg, coriander and savoury over the top. Season well with salt and pepper and drizzle a little extra olive oil over the vegetables. Place into a moderate oven for 30 mins or until well cooked. After 15 minutes, turn the pumpkin over to ensure it’s roasted evenly.

2. Meanwhile in a large pot, add a good glug of olive oil and add your chopped onion. Let it brown well before adding the butter, garlic and rice. Cook the rice for a minute or so until it’s well coated in the melted butter.

3. Add a cup of warm stock to the rice and stir continuously. Once all the rice has absorbed the stock, stir in the wine. Add the rest of the stock a cup at a time until it is fully incorporated ensuring you’re stirring continuously to prevent the bottom from sticking. Taste the rice and add some water if it still needs cooking further.

4. Once the rice is cooked, remove from heat and add half the parmesan cheese. Cover the rice and let stand for 5 minutes. By now the pumpkin and bacon should be cooked. Removed from the oven and let it cool for a few minutes before serving.

5. Serve the rice onto the plate, top it with roasted pumpkin and bacon and sprinkle with parmesan cheese. 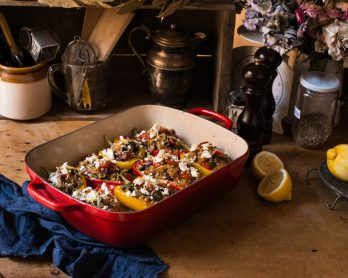 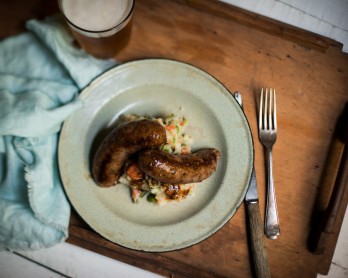 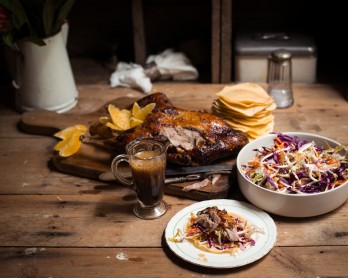 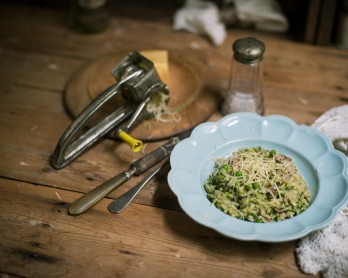